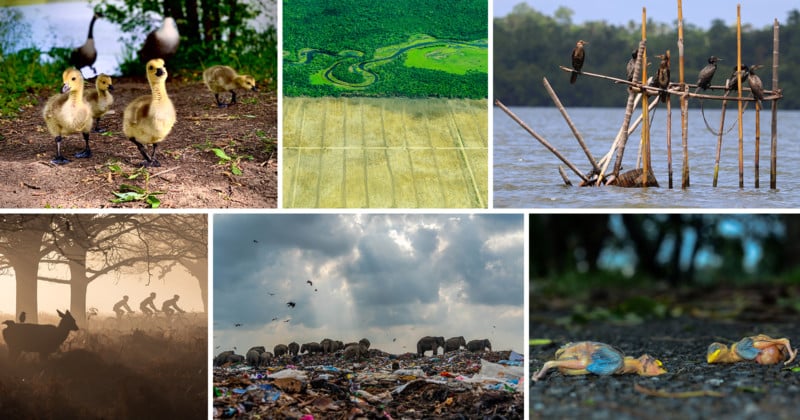 Last week, the UK’s Royal Society of Biology unveiled the winners of its annual photo contest. And while you’ve probably never heard of this particular contest before, this year’s winning image has earned the contest a place in the headlines.

The theme of this year’s contest was “Our Changing World,” and the RSB received thousands of entries from across the globe for both the Adult and Young Photographer of the Year categories. The goal of the judges was to identify photos that “highlight the dynamic nature of wildlife, sometimes catalyzed by human impact.” And that’s exactly what they found.

The overall winner and Photographer of the Year award went to photographer Tilaxan Tharmapalan, who captured a striking photograph of an elephant herd rummaging around in a garbage dump. The dump is located near a wildlife sanctuary, and while the practice of dumping garbage near these protected sites has recently been banned, existing dumps like this one are an ongoing problem.

The RSB describes the photo as “a stark reminder of the damaging impact humans can have on local wildlife.”

Photographer of the Year – Winner

Photo Caption: The elephants pictured here come to garbage dumping grounds in Ampara in search of food. Unfortunately, this causes them to fall ill and many have died.

Authorities in Sri Lanka have recently however banned the open dumping of garbage near wildlife sanctuaries.

Meanwhile, the Young Photographer of the Year award went to 14-year-old Ashwin Geerthan, also from Sri Lanka, who captured a slightly more positive image. Ashwin’s entry shows a group of cormorants perching atop poles left in the water by fishermen—an ideal perch for the birds, who are keeping an eye out for fish in the water below.

“I was inspired to photograph the subjects of my photo after seeing how birds in Sri Lanka, the cormorants, were utilizing man-made objects to their own advantage to catch fish,” says Geerthan. “I like how the photograph depicts how the natural world is adapting to human influence – humans and nature do not have to be seen as foes but can be allies, that work together.”

Young Photographer of the Year – Winner

Photo caption: These Indian cormorants (Phalacrocorax fuscicollis) are patiently waiting on a structure made by sticks that was setup by humans for fishing. The birds naturally spend time in the water swimming or on nearby trees and diving when they see fish.

In this image, the birds have used the human fishing structure to their own advantage which shows how these birds have changed to live alongside humans.

Tilaxan and Ashwin walked away with £1,000 and £500 in prize money, respectively, and will have their work showcased alonside the highly commended, runners up, and shortlisted images at the online RSB Annual Awards Ceremony.

You can watch a short interview with both winners below:

Scroll down to see the runner up and highly commended in both the Adult and Youth categories. And if you want to learn more about the contest, see the full shortlist, or find out more about the Royal Society of Biology itself, head over to the RSB website.

Photographer of the Year – Runner Up

Title: The boundary of disaster

Location: Boundary between forest and land stripped of trees for agricultural use.

Photo caption: This straight line represents the border between nature and the humanity. However, human impact like this can be seen all over the world with ecosystems going through huge, dramatic changes

Photographer of the Year – Highly Commended

Photo caption: Three cyclists are watched by a young deer in Richmond Park.

Young Photographer of the Year – Runner Up

Title: The world is a good place

Photo caption: We tend to focus on the bad changes that occur in the world around us, yet so much positivity can be found if we look in the right places.

Here, the young goslings are making the first steps into their world.

Title: End of a thousand dreams

Photo caption: As extreme weather events are becoming more frequent, it is important to recognise the impact they have not just on humans but also on the rest of nature.

Two baby baya weaver (Ploceus philippinus) pictured here had fallen out of their nest and died following a cyclone.