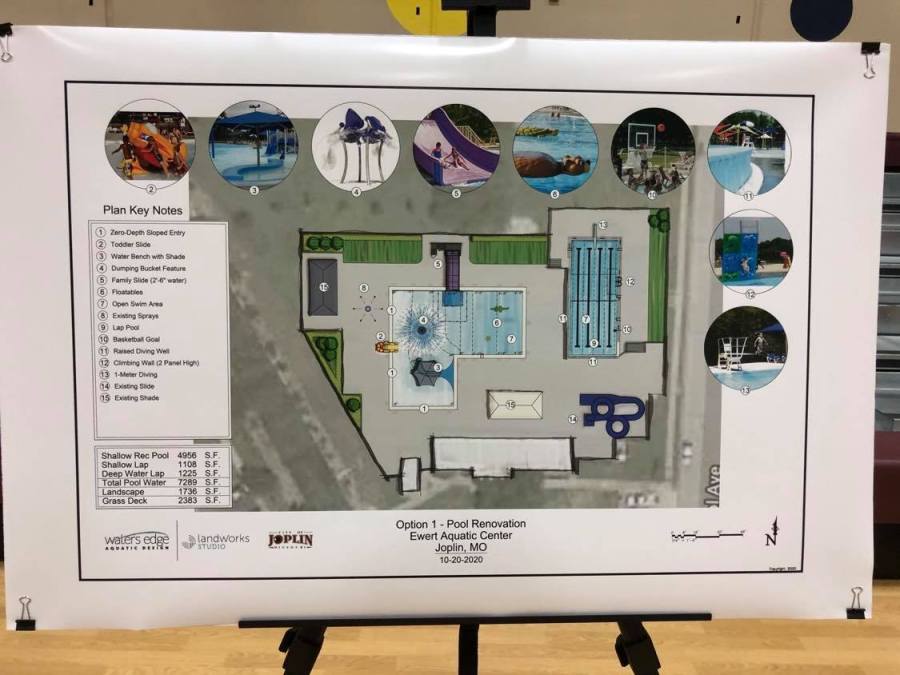 These concepts were based on the first survey results as part of the Ewert Pool Study. Consultants from Water’s Edge Aquatic Design presented the concepts along with the costs, an evaluation of the current pool structure, and more. The consultants stated that the most important aspects to consider with the future of Ewert Pool is community needs, operation goals, staffing requirements, and capital costs.

“We had four concepts presented tonight, obviously based off of what the last survey came back with,” said Paul Bloomberg, director of Joplin Parks and Recreation. “… We have a second survey going out kind of based on what you saw tonight. And then once that happens then we’ll get all the information and then I think there’ll be another public meeting, actually, before we go to city council with the final recommendation. Because that last public meeting will pretty much dwindle it down to what’s going to be their recommendation to city council. So that’s kind of the process that we will have left to go. …”

Each of the four concepts presented would include replacements and renovations of various pool structures and/or include additions. Concept one, pool renovation, would replace the pool floor, some wall, deck, and piping. This concept would also renovate pool amenities, which includes two pools—one shallow and one a deeper lap pool. This concept’s magnitude cost is $3.5-4 million.

Concept four, pool & splashpad, would include replacements of the pool floor, some wall, deck, and piping. This concept would also add a splashpad with spray features and play structure. By having both a pool and splashpad, the pool in this concept would be smaller than the current pool size.

After hearing the four concepts, Joplin residents in attendance spoke out about their concerns. One recurring concern was about taking into consideration the historical value of Ewert Pool. Bloomberg said he was not sure how much historical value is left of the original 1974 pool, after its renovation in 2003.

“… The historical part and the legacy of Ewert Park is huge, I mean that has to be on the front burner on any decision that we make with the pool, and honestly with the park,” Bloomberg said. “We have the park master plan that just started up that’s going to be looking at our whole parks system. Ewert is going to be a vital component in that master plan. It obviously is one of Joplin’s finest parks, we’ve put a lot of amenities into Ewert Park, so Ewert Pool is just one little thing to that whole park area. But first and foremost, will be the history and legacy needs to be remembered.”

The consultants explained the differences in operating and costs between pools and splash parks. First, they said that operating costs between pools and splash parks are similar except for staff and management. Splash parks are the cheapest, the pool & splash park combination is second cheapest, and a pool is most expensive. They also explained that oftentimes splash pads and parks are open earlier and later than pools and can typically be either free or at low cost to the public. After presenting the four concepts, the consultants said they “want to honor the history and legacy” of Ewert Pool.

“These are just the original concepts, just because you see what you have here tonight doesn’t mean it’ll be the final what will go,” Bloomberg said. “Some concepts may be pulled from each concept for a final concept. So, there’s still areas to open up and change that, you know, we’ll see—we’ve still got another survey to go. And it’s important that the public gets out and lets us hear their voice.”

Bloomberg said they originally planned to take the final concept recommendation to city council in mid-November but that it looks like that may be pushed to December instead. Joplin residents are encouraged to participate in the second Ewert Pool Study survey so their opinions may be taken into account. Keep an eye on the Joplin Parks and Recreation Facebook page for the upcoming survey.

“This whole study is for the public … you saw the community talking about the history and everything tonight, I didn’t know that,” Bloomberg said. “Their word is much more important than my word and they know what community wants and needs. So, it’s vital that they come out and give us their input so we can make sure we’re doing it right.”