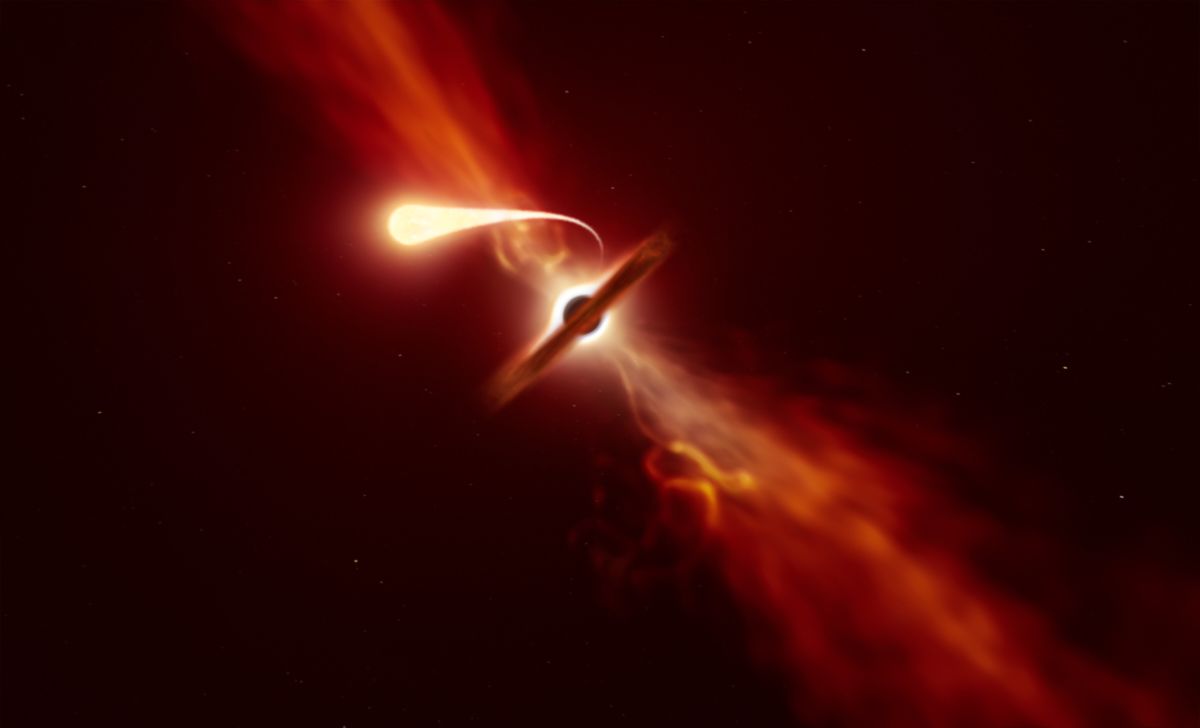 Telescopes have captured the rare light flash from a dying star as it was ripped apart by a supermassive black hole.

This rarely seen “tidal disruption event” — which creates spaghettification in stars as they stretch and stretch – is the closest such known event to happen, at only 215 million light-years from Earth. (For comparison, the nearest star system to Earth – Alpha Centauri — is roughly 4 light-years away, and the Milky Way is roughly 200,000 light years in diameter.) One light-year is the distance light travels in a year, about 6 trillion miles (10 trillion kilometers).

“The idea of a black hole ‘sucking in’ a nearby star sounds like science fiction. But this is exactly what happens in a tidal disruption event,” the new study’s lead author Matt Nicholl, a lecturer and Royal Astronomical Society research fellow at the University of Birmingham in the United Kingdom, said in a European Southern Observatory statement. Researchers caught the event in action using numerous telescopes, including ESO’s Very Large Telescope and New Technology Telescope.

Related: The strangest black holes in the universe

“When an unlucky star wanders too close to a supermassive black hole in the center of a galaxy, the extreme gravitational pull of the black hole shreds the star into thin streams of material,” co-author Thomas Wevers said in the same statement. Wevers is an ESO Fellow in Santiago, Chile and was at the Institute of Astronomy at the United Kingdom’s University of Cambridge when he did the work.

It has been difficult to see these events in the past because the black hole eating up the star has a tendency to shoot out material from the dying star, such as dust, that obscures the view, ESO officials said.  Luckily, the newly studied event was studied shortly after the star ripped to shreds.

Researchers studied the event, known as AT 2019qiz, over six months as the flare became bright and then faded away. Observations took place in ultraviolet, optical, X-ray and radio wavelengths. Looking at the event in this comprehensive way showed how the material leaves the star and the flare  the star sends as its dying gasp, researchers said.

The team also estimated the size of the doomed star at about the same mass as our own sun. It didn’t have a chance against the black hole, which has a mass of more than 1 million times that of the sun.

AT 2019qiz also acts as a bellwether for learning about how matter behaves in the extreme environment around supermassive black holes, the team said. A study based on the research was published in the Monthly Notices of the Royal Astronomical Society.