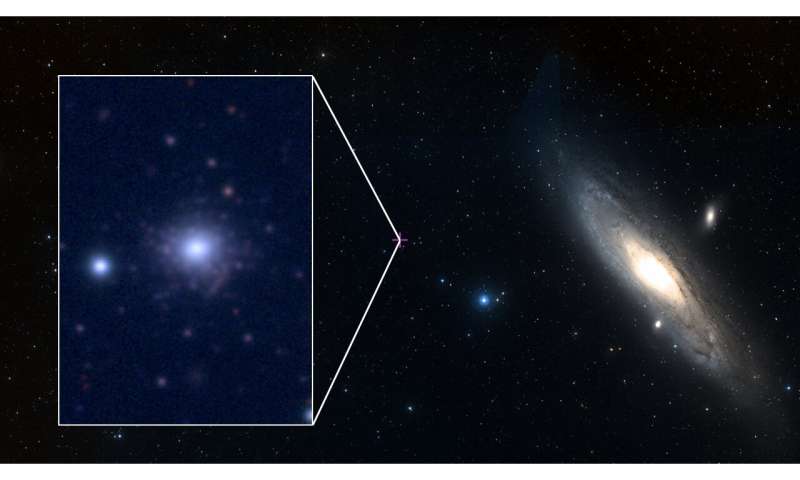 An international team of astronomers led by Soren Larsen (Radboud University, Nijmegen, The Netherlands) has accidentally discovered a globular cluster that contains extremely few metals, those elements heavier than hydrogen and helium. The astronomers had some spare observation time and decided to include the globular cluster in the Andromeda galaxy as a bonus. They will publish their findings in the journal Science on Friday.

Globular clusters usually consist of hundreds of thousands or millions of ancient stars that move as a group through a galaxy. The metal-poor globular cluster is called RBC EXT8 and is located in the Andromeda galaxy. The stars in the cluster have on average 800 times less metals than our sun and are three times lower in metal than the previous low record in globular clusters.

The astronomers are puzzled, because until now, it was thought that large globular clusters had to contain a considerable amount of metals. The new find calls this so-called metallicity floor into question. In addition, the discovery may also have consequences for the theories about the formation of galaxies in the young universe.

The researchers made their observations with the HIRES spectrometer of the Keck Telescope in Hawaii. On 25 October 2019, they disentangled the light of five globular clusters in galaxies near the Milky Way. Originally, the globular cluster RBC EXT8 was not on the program, but the researchers had a couple of hours of observing time left and decided to aim their telescope at the cluster. They made two spectroscopic observations of 20 minutes each for the metal content and used three archive images from the Canada-France-Hawaii Telescope to determine the size of the cluster.

Larsen says, “Because of the time difference between Hawaii and the Netherlands, this was ideal for me. I could look at the stars from my living room during the day.”

In the future, the researchers hope to find more metal-poor globular clusters and solve the mystery about their origin.

This document is subject to copyright. Apart from any fair dealing for the purpose of private study or research, no
part may be reproduced without the written permission. The content is provided for information purposes only.